Tackling toddler sleep?
Enroll in our FREE PREVIEW CLASS
Most people tackle their nursery decor during pregnancy. Should I get a mini crib, on top of a full-size crib? Should I get a rocking chair or a glider? Where will the changing table go? Should I even get a changing table? And the most looming question of all: what will the nursery theme be? The problem is, you don't always know what you'll need until baby arrives, and you often don't know what theme will actually fit your little one's personality until later on. So decorating a nursery while expecting turns out to be trickier that we may think. It's certainly been a long and ever-changing process for me. After spending so much time decorating my baby girl's nursery, I ended up co-sleeping with her in a Dock-A-Tot, and she never even enjoyed the nursery that much. Indeed, Indie Rey played in other parts of the house, close to wherever I was getting work done; and I didn't sleep train her, in her own room, until she was a little over four months old. So when we unexpectedly decided to move last September to be in a more kid-friendly neighborhood, you'd think that I would have learned my lesson and would maybe spend less time on the new nursery. Well… Joke's on you -- or on me, I'm not sure. Of course, I was sad to leave behind all the hard work we had done to design Indie's first bedroom. But I was also so excited to be able to reimagine her universe. And now that I knew her personality better, I could finally incorporate more of herself in the decor. 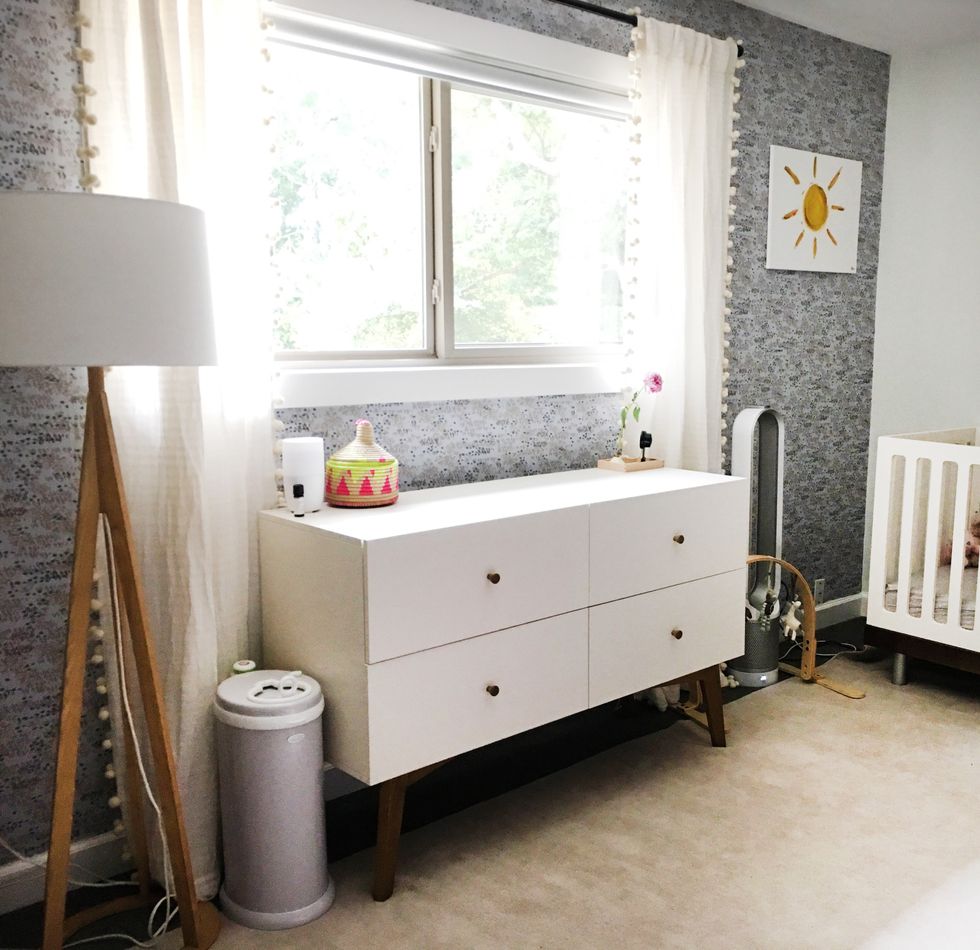 Indie Rey is a very smiley and happy baby, and I wanted that side of her personality to transpire throughout the room. I wanted to create a fun color palette that could easily transition into toddlerhood. Adding wallpaper seemed like a great way to do that; and the Wild Grass print from Chasing Paper was just the perfect match with just the right amount of abstract to titillate her imagination. Plus, the wallpaper was so easy to use: simply peel and stick it to the wall. When Indie Rey was born, I started calling her “bubble gum," which eventually turned to “my Sunshine Bubblegum Girl!" To commemorate her nickname, my good friend Jenn made this adorable handmade sign for her 1st birthday, which now hangs above her crib! Her mobile is by @_jujujust_. Both pieces add the perfect pop of color, and I love the mobile so much, I think I'll keep it for my next baby, too! As Indie grows, I constantly move furniture around, add furniture and toys, and clean out her toys and clothes! She learned to crawl, stand and almost walk (she's so close!), and we quickly realized that there were a few things we didn't need anymore. For example, the moment that she became mobile, she hated being on her back, and changing her on the floor with a toy to distract her became a whole lot easier. So we got rid of the changing table. We replaced her Lorena Canals rug, which we now use as a rug around the dinner table since it's so easy to clean, with a large Restoration Hardware vintage-washed chenille rug. Finally, though I want the room to be pretty for me to look at, I want it to be hers. So I've added pieces that are fun and engaging for her, like the Monte Design Cubino chair, which she loves to climb in and out of. We're also incorporating as many musical elements to her room since she's developed a new love for singing and dancing. I hope you enjoyed the tour to my little one's space. Want to know where everything is from? Here's a list: Jujujust mobile Dyson Air Purifier Anthropologie Pom Pom curtains West Elm Graham Glider West Elm dresser Oeuf Classic Crib Oeuf Classroom Storage Restoration hardware rug Monte Design Cubino chair Chasing Paper wallpaper Target Unicorn Head OxeyedBaiby Romper The Paper Bouquets Flower Crown Backpack Zara Kids Little Bundle Pom-Pom Tassels Olli & Ella Bins Maileg Mr. Fox Roxy Marj Bear Blanket Yarning Made with Little Bundle Equality exclusive blanket Atsuyo Et Akiko x Jess Brown Annie is a mama to Indie Rey and two mini Australian shepherds, Maddie and Macaron residing in Austin, Texas. She is the founder of A Little Bundle, started as a subscription baby box turned e-commerce, and a marketing service, Unicorn & Rainbows. Annie loves traveling, online shopping, food delivery and anything gelato related.